A sudden plan emerged to meet the aesthetics of the Himalayas filled with fun and adventure. 4 people with 0 trekking experience were ready to march into the cold mountains with minimal yet sufficient gear.

Note: If you have never done trekking, you must read out my blog about trekking by clicking here

Day 0: Reporting at the base camp in Manali

From Delhi, the most trustworthy mode of transport (since it is the only mode), a bus took us to the beginning of our destination, Manali. We managed to find the organizers who took us from the roads to Manali, to the location from where we were going to embark on the journey. We stayed there for a day, walked for a mile, and came back. We realized that we had a diverse group with people from different parts of the country and different age groups. After dinner, we heard some sounds of some wild animals which prepared us for the adventures. “Hampta Pass Trek in Manali” is definitely going to be fun.

Day 1: Drive to Hampta Dam and Trek to Chikka

We wake up, have breakfast, sit in a jeep, and get to the highest altitude where vehicles can take us. A group of 24 people, filled with zeal and energy were ready to march all the way up the mountain from our base camp at Jobra.

The Starting Point at Jobra Dam

We had some snacks and tea before we left. The weather was not that cold, rather it was sunny. Even though the temperature was mildly lower than usual, the sun suggested that we should rather have summer clothes on while we walk. With the backpack on, we started walking on the trail. The guides from the organization were in the front and the back, guiding us through the rocks and forests. We stopped thrice and encountered breathtaking sceneries.

Finally, we arrived at the camping site at Chikka sometime before evening. We were tired yet satisfied because we successfully completed the first day of the trek without any problem. Though, little did we know that things get tougher than what was covered today. The guides cooked the food for us, and we had an early dinner. We were instructed to sleep early because we need to wake up at 5 am the next day and everyone was supposed to be ready by 6. The group had a bunch of students, and if you have ever been one, you would know how much we like to sleep early. We made a small seismometer of our own, for fun. 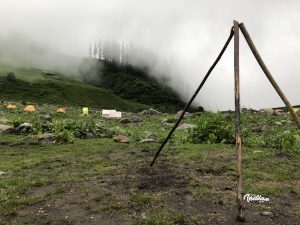 Our very own seismometer.

We played some music and danced before it got really dark. People went inside their camps and started putting in the effort to sleep early. At random times, we heard animal sounds that were scary and thrilling at the same time. Possibly a horse or a cow was there for some time, grazing the grass. 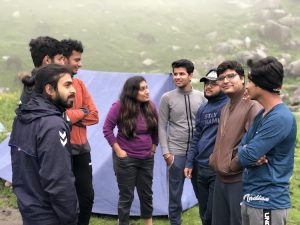 Getting to know the group.

The three-legged seismometer was down and we made up a story that a bear was around. Of course, most of the people did not believe it, but some did. Though later we clarified that it was just a cow/horse (probably). The restrooms at the camping sites are human-dug holes, so it’s not the most pleasant experience, but that’s what camping & trekking is, right? We have to explore nature and act more naturally. Everyone was ready in time, which was a little surprising to me, given the distribution of people in our group and the time when we had to leave (yes, 6 am). Again, the sunny weather but with a few chilly winds added welcomed us as we climbed up towards Balu ka Ghera.

The altitude was increasing and with that, some people started feeling some discomfort. It did not stop up from maintaining our pace for quite a while. We walked through some slippery paths because of the dew collected during the dawn. Generally, it rains during the afternoon or the evening, that’s why we had to start early, as we were told. But, of course, the original reason was, they were not sure if everyone will be able to maintain the pace and reach the next camping site in time, therefore it’s better to start early. But anyway, we stumbled upon sleets on our way up and frozen piece of land under which we could see the water flowing. Luckily we did not have to walk on those a whole lot.

After a while, we reached a pass crossing with much better and pleasant weather. The place which is called the valley of flowers was lush green and the fog & the mist just made it look perfect. After having our lunch there, we started again. We had higher expectations from the trek every day and it never disappointed us. We reached a place where we had to walk on snow with caves around. And it was not soft snow, so we could not use our gear to walk on it. It was easy to just slip and slide all the way down into a river and get carried away. And while we were figuring out all of this, the weather said: surprise!! The fog started to grow upon us and the visibility range decreased to less than 5m. We were walking on snow with no visibility. We did stick together and made it through. As soon as we reached the site, everyone had a breath of relief and happiness, because, “we made it”. Once everyone was there, we enjoyed the view of the mountain and the clouds blending in to give us some exquisite tableau of nature. Balu, which resembles sand “in English”, is known to get very cold at night. And that’s exactly what happened. The night was so cold that it was not easy to sleep.

Waking up before the sun is up and fighting through the scary drop in the temperature, we were ready with some hopes for this day. The next stop was Shea Ghoru (Or Siagoru), called the valley of death. Don’t ask me, why is it called the name it is called, but we did get to know at least one reason for the same. This day was covered with all kinds of snow and weather. The day started off well, with some rocky terrain and snowy paths. Eventually, it led us to hills covered completely in snow.

As we kept reaching our next hilltop, we could see another top we had to cross. And at one point, we had to cross a river where the water was running at a high speed and it was cold enough to give people hypothermia attacks. We carried our shoes tied to our backpacks so it does not get wet. We formed a human chain that was close to a mess. Imagine 24 people holding hands and trying to cross a river in which we just saw a horse fell down. It was tough to move because the rocks beneath us were slippery and the current was strong enough to shift a lot of people while they are trying to lift their feet to move one step. Also, it needed to be in perfect sync so that people don’t just bump into each other and fall down. With god’s grace, we somehow managed to cross it. After that, the snow trails continued.

At one point, we had to walk up a hill with an angle of around 45 degrees, covered with snow. It was so easy to slip down all the way to the point from where you just started walking up. And it was the case for a few people quite a few times. Finally, we made it to the campsite, which again was very cold. However, the night was mesmerizing. We could see so many stars and the evening light with a taint of purple made it look like the pictures you see on Instagram about camping with a stunning background. 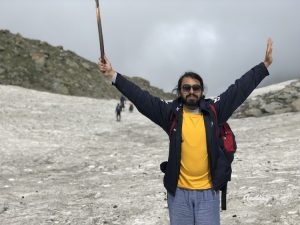 So happy to reach the top. Ignore my belly. 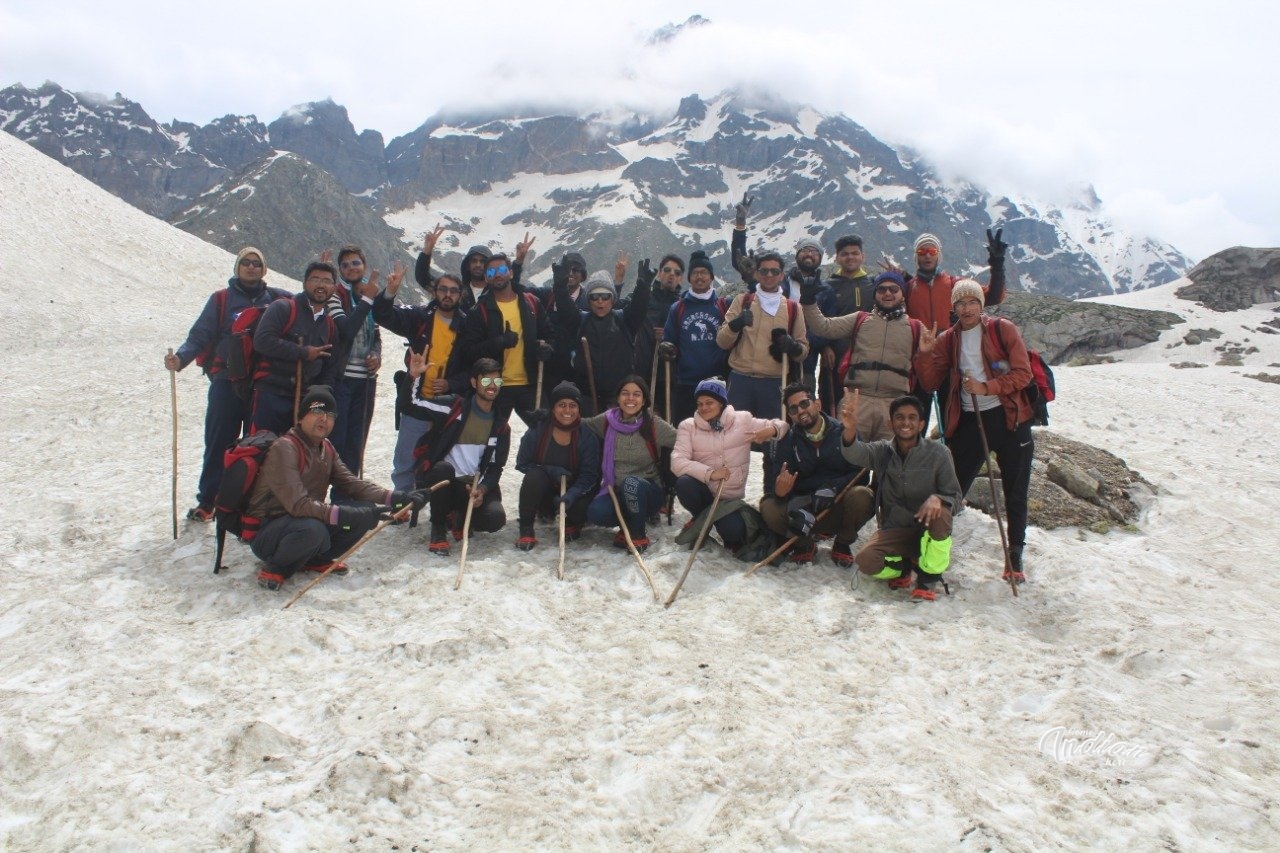 The Conquerors at the Top!

This was a shorter day because we also did some descend. Let me tell y’all something, not all descend are easy, especially on trekking. While we faced the problem of having to walk down through the mud and trying not to slip and take everyone in the front down with us, we also had to be very careful as to we don’t break a rock or accidentally throw a rock down. Even a tiny piece of the same is capable of piercing through the skull if it falls from that height.

After a while, we stopped at a point where we had to cross an area covered with snow which looked similar to the area we have outside the windows of apartments of high-rise buildings. It was so scary and of course not safe. But what we ended up doing instead is something generally people will consider madness. Instead of walking over that narrow bridge-like path, with which we were scared to fall down, we chose to fall down intentionally. Yes, you read that right, we chose to slide down the ice which was not meant for sliding, trust me. However, it was so much fun (other than our pants being all wet and cold). It was once in a lifetime experience, sliding down the snow in pants, on a mountain, with rough terrain. Luckily we did not get any bruises. 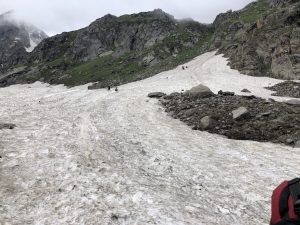 They were pushing us and we were sliding on the ice.

Almost reached. It was raining.

We rushed to the camping site. It was the last walking portion for us. We were there early, thanks to choosing the slide instead of walking down 2 miles. We had a lot of fun and we’re glad that everyone made it to the end. We wanted to do a bonfire but couldn’t. So we just sang and danced instead. We enjoyed the entire night, talked to our guides about their lives, and had a lot of fun. The show went on until midnight.

We got up relaxed and most importantly, not at 6 am. Today’s plan was to go to Chandrataal. So we packed everything and started the voyage. The road towards Chandra Tal was in a bad shape. We stopped midway, got out of our vehicles, and looked at the situation a few miles away from us. A lot of cars and bikes were stuck because of the rain and the pebbles on the road. 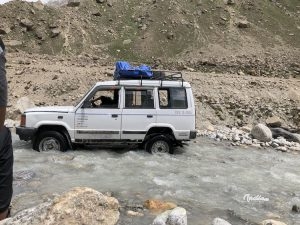 This car was struggling for hours. I hope they’re outta there now. 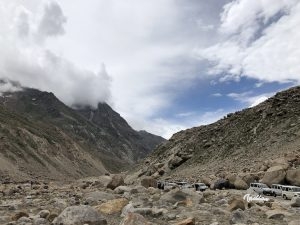 The way to Chandrataal Lake

The entire road was blocked because of these things and therefore we had to return to our camp after staying there for about 3 hours. Finally, we went to Rohtang pass, though it was raining most of the time. On the pass, there was a point where a small portion of land slid and broke a tree which covered the road leading to an accident. It took a few hours to clear the road and then we went back to the place we started the trek at. The entire trek was successful and everyone made new friends. I am sure, everyone will have something to add here, but the one thing we all agreed upon was:

it was a life-changing experience was all of us and most of us wanted to do this again at some point.

You can book with Kailash Rath Treks directly. They are good at what they do. 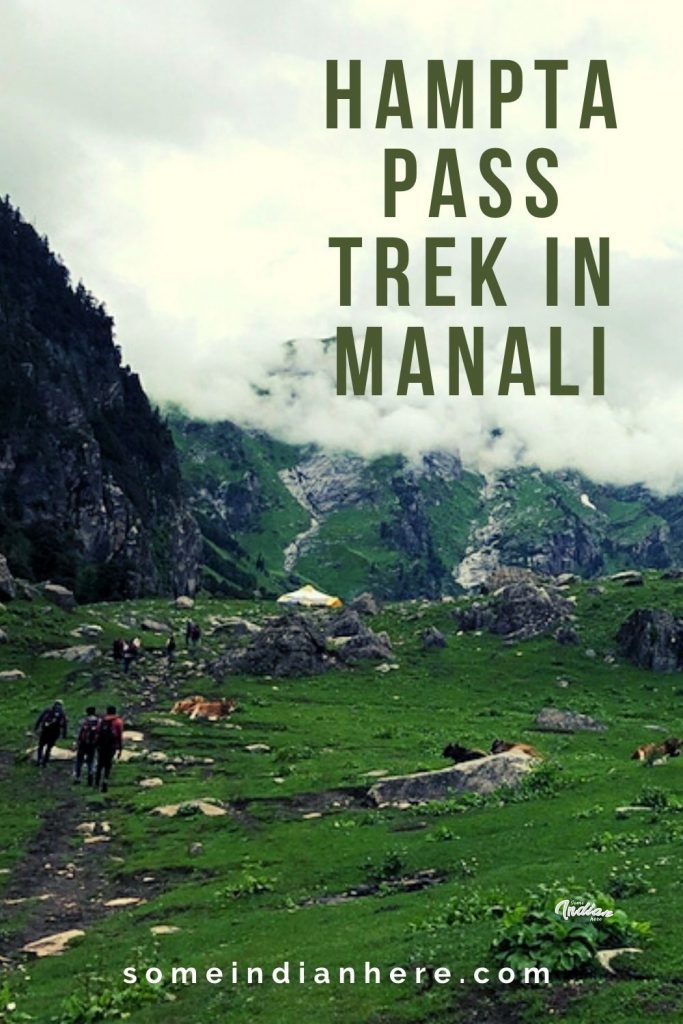 Explorer everyday. Writer on weekends. I Love Photography. & can Cook :) Meet me when in Goa !! 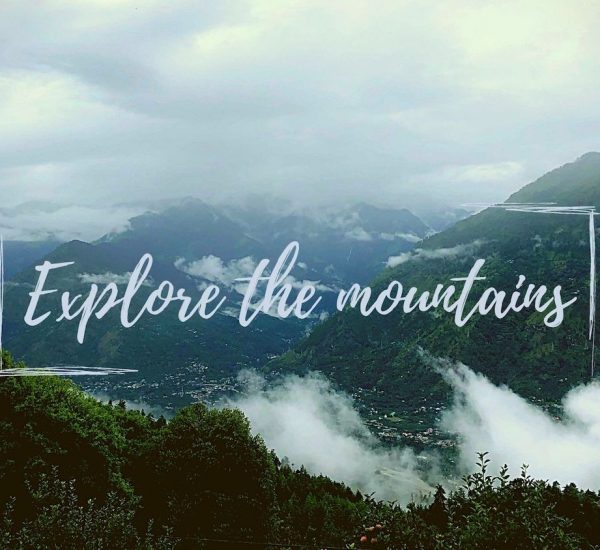 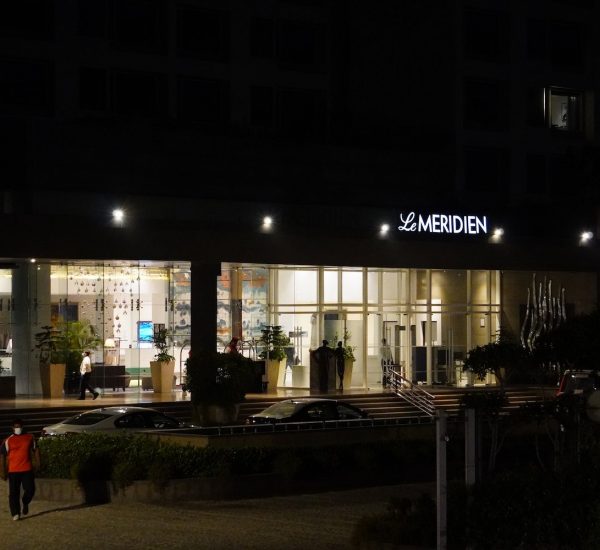